Dennis G Bellin 89 of Fargo, formerly Hankinson, was called by his Heavenly Father on March 25, 2022.

Dennis was born to William and Caroline (Nietzel) Bellin on September 25th 1932 at their home in rural Hankinson. He was baptized and confirmed at Immanuel Lutheran Church. He attended school at Immanuel Lutheran Parochial and Hankinson Public. While attending school he worked at the movie theater running the projector for 15 shows a week.

He married Mercedes Place on October 26th 1952. He served in the US Army. (He received his draft notice the day Mercedes bought her wedding dress.) Therefore their first years of married life were spent traveling to different military bases. Upon discharge from the Army he worked for Jack Place Sand and Gravel. He also worked construction and later for Hankinson Creamery. In 1966 he began employment with the Soo Line Railroad from which he retired in 1992. Dennis and Mercedes loved to dance. He played golf and even got a hole in one. They loved to travel and spent 17 winters in Arizona living in their large motor home. They were active in the park and were shuffleboard champions several times. He also liked to make things with stained glass.

He was preceded in death by his parents, son Dennis Jr and sister Fern Branson. 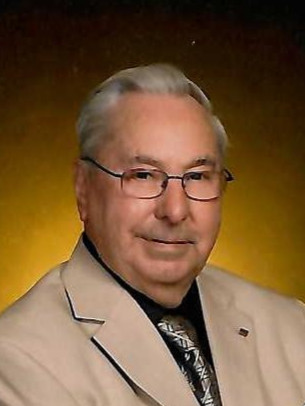