Evelyn L. Kvamme, 100, of Moorhead, MN, died Thursday, April 14, 2022, at Lilac Homes in Moorhead. Evelyn Lavella Wolff was born March 26, 1922, in Dead Lake Township, Otter Tail County, MN, to George and Clara (Hanebuth) Wolff. She grew up in Waubun, MN, where she graduated from high school. Following high school, she continued her education at Mankato State University. On January 17, 1942, Evelyn married Richard S. Kvamme of Gary, MN, in Portland, OR. After a few years, they moved back to the area and settled in Moorhead, where they raised their daughters, Debra and Yvonne. She was a member of Trinity Lutheran Church in Moorhead. She taught Sunday School when the children were young, took part in women’s activities and serving groups, and attended Bible classes. Along with Richard, she was involved with Operation Bootstrap, Tanzania. Evelyn loved reading, cooking and baking, especially with her grandchildren. She enjoyed staying active in her community by taking part in activities of PEO, Eventide, Nokomis, Campfire Girls, YWCA, and St. Luke’s Hospital Auxiliary. Evelyn and Richard also enjoyed the outdoors and traveled extensively. She always said her “favorite places to take in God’s creation were at the top of Vail Mountain and at the end of the dock at Big Sand Lake.”

The family would like to thank the staff of Lilac Homes and Hospice of the Red River Valley for all the love and tender care extended to Evelyn.

A celebration of life service will be held on Saturday, May 21, at 1:00 p.m., in Trinity Lutheran Church in Moorhead.

Visitation will be held one hour prior to the service in the church.

Interment will be at Riverside Cemetery in Moorhead. 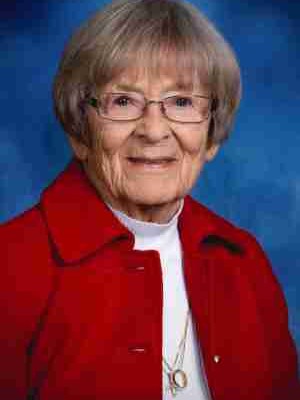