Gerald treasured the many canoe trips to Canada with his father and brothers. He spent his summers as a young man on Floyd Lake and later with his own family at their lake home on Pelican Lake. Gerald had many stories of his adventures on the water.

At the age of 15, Gerald met the love of his life, Brenda Cruz, and they went on to spend 64 years together. Gerald and Brenda inspired the best in each other. On June 9, 1961 they were united in marriage. To this union, 3 children were born: Bradley, Dawndi, and Jason.

Gerald worked with his father and uncles at Eid Brothers Construction, later renamed Eid-Co Buildings Inc. Gerald served as CEO/President of the company for more than 35 years. He was passionate about home building and making home ownership more affordable. During his career, Gerald introduced many innovative building techniques to the area, including making homes energy efficient, and he oversaw the construction of thousands of new homes in the Fargo-Moorhead region. He is a designated Realtor Emeritus and recipient of the lifetime achievement Cornerstone Award from the Home Builders Association of Fargo-Moorhead in 2005.

He was a well sought-after housing expert regarding frost protected shallow foundations and removing barriers to affordable housing. Gerald served on numerous local and national housing committees and boards. Gerald was president of the Home Builders Association of Fargo-Moorhead in 1989, as well as being name local and state Builder of the Year in 1982. Gerald served as chair of the North Dakota Housing Finance Committee for over 25 years and was appointed to an affordable housing committee by President George H.W. Bush in the 1980’s. In his later years, Gerald was a board member for the Federal Home Loan Bank of Des Moines and the Board of Regents at Concordia College, Moorhead.

Gerald and Brenda played in several bridge groups over the years, as well as participating in dance club. Gerald also had an interest in aviation. He obtained his pilot’s license and flew all over North America. Gerald and Brenda traveled to many, many places nationally and internationally with close friends and family.

Gerald’s main activities were thinking about how to solve or fix all types of problems, tinkering with & re-using hardware, working hard, and admiring his wife. Gerald’s dedication and love for Brenda was always so apparent. As she approached end of life and not wanting to concern his family, Gerald was determined to be her sole care giver.

He is preceded in death by his wife of 58 years, Brenda; brother Luverne; and his parents. 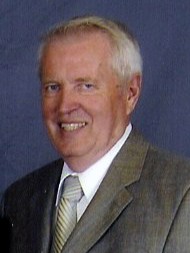