Joel Hegerle, 72, of Moorhead, died unexpectedly of natural causes, while trying out his new flippers at his local YMCA on Monday, July 18, 2022.

Joel Franklin Hegerle was born May 24, 1950 in Fergus Falls, MN, the oldest of three sons born to Wilbur and Marlys (Ohman) Hegerle.

Joel graduated from Fergus Falls Senior High School in 1969 and attended Minnesota State University-Moorhead, graduating in 1973 with a B.A. in Art; launching his career as an artist which spanned over 50 years. His creative motto being, “If I can make you smile or laugh at my art, then it has accomplished what I meant it to do.”

Joel loved being married and was wed three times over the years. He was the father to two sons, Jack and Luke and grandfather to Leif, son of Luke. He loved art, music, traveling, gardening, and spending time with his family, special friend Nancy Falck and his many, many friends.

Joel was a warm-hearted and genuine person who was a fixture in the F/M art community and could be found at most art openings in the region, ready to offer encouragement and a funny story to fellow artists, friends and patrons alike.

Joel spent his early working career in the printing industry and was employed for 22 years at Victor Lundeen’s Company in Fergus Falls. He then attended NWTC, Detroit Lakes, where he earned a degree in Neon Sign design and fabrication, working for Indigo Signs in Fargo, ND in both fabrication and sales until his semi-retirement. Joel never fully retired as he was also an avid day trader, a passion he picked up in the 1980’s which was a labor of love that he continued to “enjoy” well past his “retirement”.

On April 27, 2022 Joel proudly celebrated his 30 year sobriety birthday, and was a true beacon of hope to those in the recovery community. Joel was a sponsor to many over the course of those 30 years, and provided a “mirror for what is possible” to many more.

He has exhibited in over 60 juried shows around the Midwest as well as group and solo shows. His work is represented at the Rourke Art Museum, Plains Art Museum, DK Gallery, Fargo-Moorhead; Tweed Museum, Duluth; The Winnipeg Art Gallery; Sidney Rothman Gallery, Barnegat Light, New Jersey; as well as numerous corporate and private collections.

Preceding him in death are his parents, Wilbur “Willy” and Marlys Hegerle, many close friends and his beloved min-pin, Mini.

Joel’s spirit will live on in the objects he created and in the people whose lives he touched.

In lieu of flowers the family asks that donations be made in memory of Joel to Rourke Art Museum (Moorhead), Gladys Ray Shelter (Fargo), Cat’s Cradle Shelter (Fargo), or Kaddatz Galleries (Fergus Falls).

Farewell Joel, Dad, Grandpa Joe, Brother, Uncle, Friend, we’ll find you in the colors of a monarch, an old country song, an honest remark, and a good cheap meal.

A Celebration of Joel’s Life will be at 2pm, Friday, July 29, 2022 at Hanson-Runsvold Funeral Home, Fargo, ND with a visitation one hour prior. The service will be livestreamed on the funeral home website. 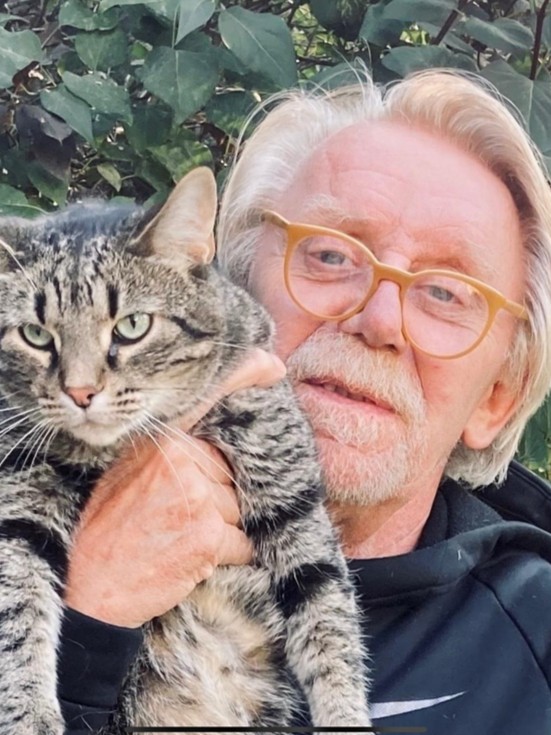