Dad was born on the family farm on December 13, 1934 to Adolph and Mildred Helgaas in Fertile, Minnesota. His birth certificate says that Adolph delivered him when he was born.

Dad graduated from Central High School in Crookston, MN. He choose to attend North Dakota State University to play football and graduated with a degree in Agriculture Economics in 1958. While attending NDSU, he was a member of the AGR fraternity. Dad met Mom (Jean Ann Nelson) at NDSU when he was working in the kitchen as a table bus boy at the Gamma Phi sorority house. Mom was homecoming queen at NDSU and the table bus boy married the homecoming queen on June 27, 1957 in Milner, North Dakota. They were married for 39 years before Jean passed away in 1996 of Scleroderma at the age of 59. Jean and Maynard have four children Julie, Ann, Kathryn and John.

Dad married Julie Schauer in Jamestown, North Dakota in 1997. They were married for 25 years until Julie passed away on April 21, 2022. Julie has three children Jim, Sarah and Tom.

Dad was involved with agriculture his entire life, starting with working on the family farm in Fertile, MN. After college, he began his career as a Clay County Extension Agent, then became Branch Manager with Production Credit Association in Wahpeton, ND and Crookston, MN.

In 1964, Dad and his father-in-law Elwood Nelson, purchased Jamestown Implement in Jamestown, North Dakota. The family business grew into six John Deere dealerships, a New Holland dealership, a diesel service business, an agriculture supply and service company, an irrigation equipment company, and a lease company. In 1976 Dad became a partner in an irrigated farming operation in central North Dakota eventually growing some of the first potatoes that were processed by the French fry plant that he recruited to open in Jamestown.

After 30 years in the family business, he retired in 1994 and spent the next six years as President of the Central Dakota Growers, a seven-county green field potato project. After Central Dakota Growers, Dad was President of the Green Vision Group of Fargo, a company that investigated and promoted the energy beet industry. He was Chairman of the North Dakota Implement Dealers Association and the North American Equipment Dealers Association. Dad was a founding member and president of two foundations: Foundation for the Advancement of Christian Education (FACE), and the North American Equipment Dealers Foundation. He served on many boards including Ottertail Power, Jamestown School Board, Stutsman County Bank, Central Dakota Growers, Central Vegetable Growers and Garrison Diversion Project. Dad received many awards including the John Deere “Top 20 Dealers Award” and the North Dakota National Leadership Award of Excellence. In 2012, he was inducted into the North Dakota Agriculture Hall of Fame.

Dad was a natural entrepreneur which began when he was in school when he would gather coal along railroad tracks and sell the coal to pay for his school activities.

He had a love of the outdoors including hunting and fishing. Dad loved raising pheasants and hunting with friends and family at the Dawson, ND cabin. Along with friends and family, Dad built a cabin on Lake Amisk, Saskatchewan in the late 1960s and went fishing there every year of his life until COVID. Dad was a lifelong Bison season ticket holder and rarely missed a Bison football game. He attended many Bison football championship games in Frisco, Texas.

When Dad lived in Jamestown, he supported high school activities and enjoyed watching his kids and grandkids at their sporting events. Dad believed strongly in his community and his state and devoted much of his time in the development of both.

Dad was preceded in death by his parents Adolph and Mildred, his father and mother-in-law Elwood and Helen Nelson, his step-father Fred, his sister Laverne Rongen, her husband Chuck Rongen, and brother-in-law Bob Tuma.

In lieu of flowers, the family requests that donations be made to: St. John’s Academy Foundation for the Advancement of Christian Education (stjohnsacademynd.org), NDSU Agricultural Leadership Fund (NDSUfoundation.com), MN/ND Chapter of the Alzheimer’s Association (alz.org).

Arrangements are in the care of Eddy Funeral Home. 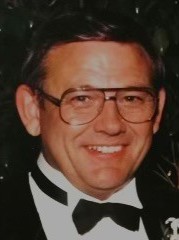