Paul Douglas Spooner, 62, of Casselton, ND, passed away on Aug. 3, 2022, due to complications from Non-Hodgkin’s Lymphoma.

Paul was born in Fargo, ND on Dec. 18, 1959, to Vernon and Phyllis Spooner. After graduating Casselton HS in 1978, Paul attended MSUM, Moorhead, where in 1982, he graduated with a degree in Management. Following college, Paul’s first job was at Lincoln State Bank in Wyndmere, ND.

Paul left ND to work for Northwest Airlines in 1986 in the Reservations office on Long Island, NY. It was here in 1987, that he met his wife-to-be, Pamela Schaefer. After a first date at Shea Stadium and at least a couple more, they married on August 24, 1990, at St. Cyril’s Catholic Church in Deer Park, NY

Paul brought his bride from her home in New York to North Dakota when they moved to Fargo in 1994. After the birth of their first son Anthony, in 1995, the family moved to their current home in Casselton where the birth of their second son Dominic, in 1998, completed their family.

On his return to ND, Paul worked for Rosenbluth International and later began working at Bremer Bank in Casselton to be closer to home. During this time, he drove truck for sugar beet harvest (often with one of his sons sitting shotgun) and began driving school bus for Central Cass Public Schools. In 2011 he began working with United Blood Services, where he continued working until his retirement.

He enjoyed teaching and helping others. While working at the bank he would give tours and presentations to elementary school classes and loved bringing along the newest nickels to hand out to each student. But it was as a school bus driver that Paul truly thrived. He loved his bus route kids, and everyone enjoyed his “Treat Friday.” He was loved by athletes, coaches, musicians, and teachers when he drove them to their events.

His family was his greatest love. He was devoted to caring for and supporting them in any way possible. He could always be found watching his boys at their performances, sports, and other activities. Cheering their successes and guiding their efforts, he was never one to miss an event involving his family.

Paul loved serving his community both as a city councilman and volunteer firefighter. He especially enjoyed driving fire engines in parades with his boys tossing out candy as well as giving fire truck rides on Halloween night.

Paul is survived by his wife Pamela, their sons Anthony (Caitlin) and Dominic, his granddaughter Cecilia, his siblings Susan, David (Darlene), and Phil (Dorothy), along with numerous nieces and nephews. 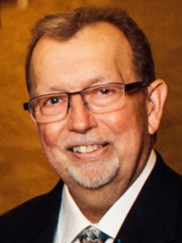