Margaret K. Gaynor was born in Scranton, PA on March 19, 1942. To family, friends, colleagues and strangers alike, she was always Peggy. Her parents, Margaret and Robert, moved the family to Virginia at the end of the WWII. She attended the St. Thomas More School and graduated from the Marymount High School in Arlington, VA. Peggy then entered the Religious of the Sacred Heart of Mary as a novice at Marymount College in Tarrytown, NY. Upon graduation, and taking final vows in the order, Peggy took a teaching position at the Marymount School in St Louis, MO. When the school closed, she continued her education and earned a Master’s Degree at Washington University. After completing her Master’s Degree, she held positions teaching math at high school on Long Island, NY and math & counseling at Pace University in New York City. Peggy met and married Fred Alm in New York City and together they decided to move to Fargo-Moorhead in 1976. Peggy was hired that year at NDSU and thus began her long standing career. For 20 years, she was a staff counselor as well as working in the Equal Opportunity Office. In the last 10 years of her career, Peggy was not only a counselor, but also was named Director of the Counseling Center Disability Services. During her tenure, Peggy was honored and recognized for her steadfast service to NDSU and the Fargo-Moorhead Community. She was an Inductee of Diverse Talents and earned the Blue Key Doctor of Service award in 2003. She also received recognition at the Gunkelman Ceremonies in 1997 and 2000 and was honored twice by the Department of Residential Life. After retiring, Peggy contributed time and talent to many civic and charitable causes: Hospice of the Red River Valley, NDSU Vet Tech Program, Fargo Symphony, Salvation Army, Fargo Library System, and Meals on Wheels. She further served as a traveling Retired Application Reviewer for the International Accreditation of Counseling Services (IACS) and established the Peggy Gaynor Scholarship at NDSU to aid students pursuing theater arts. She was a member of the Bison Arts Board from 2012-2018 and honored as a valued music supporter by the Challey School of Music. In 2021, Peggy was recognized by Bethany Retirement Living as Senior of the Year. If there was a project to be done, Peggy could always be counted on to lend a hand.

Peggy was preceded in death by her parents, Robert and Margaret Gaynor, her sister, Molly Gaynor, and a nephew, Malcolm Aziz.

She is survived by her sister Barbara Rose Gaynor, her brother Robert Gaynor, her niece Emily (Byron) Carpenter, and their son Campbell Carpenter, as well as many loving friends.

In lieu of flowers, donations can be made to Sanford Hospice House, Hospice of the Red River Valley, Fargo Library, or any other organization of your choice.

A memorial mass will be said for Peggy at St Anthony of Padua Catholic Church on Wednesday, January 18, 2023 at 2:00PM with visitation starting at 1:00PM, and a reception following the service in the church hall.

Arrangements entrusted to the care of Boulger Funeral Home and Celebration of Life Center, Fargo. To sign the online guestbook, please visit www.boulgerfuneralhome.com 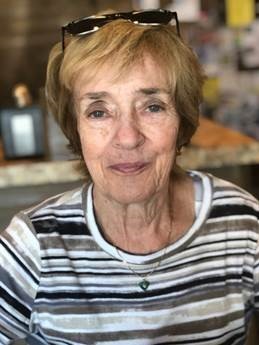