Virginia Ann Rosenfeldt,72, of Moorhead, MN, died on September 29, 2022,in Eventide on Eighth in Moorhead.

She was born on December 4, 1949, to Elmer and MaryLou (Schenck) Rosenfeldt in Moorhead. She was raised on the family farm near Sabin, MN, attended school in the Moorhead School District, and graduated from Moorhead High in 1968. After graduation, she attended the Moorhead Area Vocational Technical Institute. She lived for a time in Fergus Falls, MN, receiving further training there. For many years, Virginia lived in Detroit Lakes, MN, working at the Swift Turkey plant. After leaving Swift, she moved to Fargo, ND. She worked at various jobs in the Fargo area, including Target, Wingate Hotel, and The Forum. Upon retirement, she moved to Parkview Terrace in Moorhead, where she lived several years. From Parkview, she moved to an assisted living situation.

Ginny loved music, she sang with the Sweet Adelines in Detroit Lakes when that chapter was formed, and rang bells at Hawley Senior Living when she lived there. She collected Pillsbury Dough Boy items, Hummel and Goebel figurines, and coffee mugs. She loved to visit with people and could start up a conversation with anybody. Over the years, she took bus trips to Branson, MO, Duluth, MN, and Michigan, as well as many other trips with her family including Washington DC, New York City, NY, Philadelphia, PA, Cincinnati, OH, the Oregon coast, Montana and one geographically challenged family trip to Missouri via Montana.

Ginny is survived by her sister, Susan (Gordon) Gruchalla of Sabin; and brother, Ernest of Moorhead. She was preceded in death by her parents; and brother, Fred.

Ginny’s memorial service will be held on Thursday, October 6, 2022, at 2 PM with a visitation one hour prior, in Korsmo Funeral and Cremation Service, Moorhead, MN. Burial will be in Elmwood Cemetery, Sabin, at a later date. 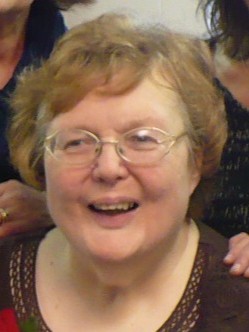